Almost a billion people around the world rely on cassava as a staple food. The root vegetable is a versatile and calorie-rich crop that is resilient enough to thrive in harsh climates.

But the cassava has no defense against a tiny insect that is decimating crops across East Africa, with dire economic and humanitarian consequences.
The whitefly carries two viruses that together destroy over $1 billion worth of cassava in Sub-Saharan Africa each year. Cassava Mosaic Disease (CMD) is the more established threat and does most of the damage. But scientists are even more alarmed by an outbreak of Cassava Brown Streak Disease (CBSD) – dubbed the “Ebola of plants.”
The disease is highly infectious, difficult to detect, and it mutates rapidly into new strains. Farmers often discover the tell-tale brown streaks only after their entire crop has been destroyed.
The outbreak could have a catastrophic impact if it continues to spread. But local specialists are working with an international coalition and state-of-the-art technology to defeat it.

Great swathes of Tanzanian farmland have been wiped out by CBSD.
“We are seeing very severe food shortages,” says Dr. Joseph Ndunguru, a plant virologist based in the East African state with the Cassava Diagnostics Project (CDP). “Farmers are just abandoning their crop, and in some areas cassava is the only staple food.”
The CDP is working in seven countries in East and Central Africa, educating farmers and local government about the problem, studying the spread of disease, and developing resistant varieties of cassava.
“We generate maps to show the distribution of virus strains in all of the project countries,” says Ndunguru. “We use them to decide where to deploy clean plant material.”
CDP teams test crops by trial and error. A variety of plant that thrives in one disease-prone area might die off in another where a different strain of the virus has taken hold. Ndunguru prefers to test his plants in the worst hotspots, plagued by multiple strains, to prove their durability. He is beginning to see encouraging results.
“We have delivered clean planting material to farmers in areas where they were getting yields of five tons per hectare, and now they are getting 40 tons per hectare,” he says proudly. “This is a huge increase that allows them to pay for healthcare and education.” 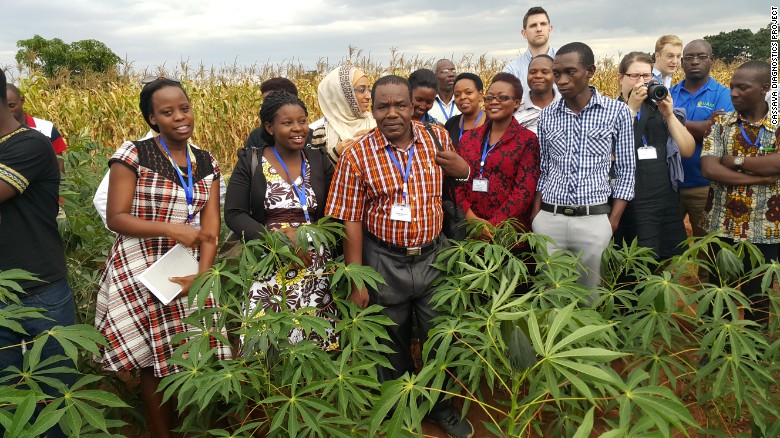 The fight against cassava disease is making use of a potent new weapon: genomics.
The CDP is a highly cosmopolitan venture, with funding from the Bill and Melinda Gates Foundation, and partners in academic institutions around the world. One valuable ally is a research group at the University of Western Australia (UWA) — home to one of the world’s most powerful supercomputers.
The group performs advanced analysis on diseased plant samples from African farms that is currently impossible in the region.
“These plants look sick but we don’t know which virus is making them sick,” says Dr. Laura Boykin, a computational biologist at UWA. “We do diagnostic tests looking for whole genomes (the complete set of DNA or RNA) of viruses, and to get them we have to study billions of base pairs.”
The practice is particularly useful with CBSD that spreads and mutates rapidly — Boykin calls it “the Ebola of plants” – and has allowed the UWA team to discover new strains of the virus. The disease had been largely contained since it was discovered in the 1930s, until aggressive new strains emerged over the past decade.
But transporting samples from East Africa to Australia for testing wastes valuable time. Diagnostic tools are needed in the field.
This frustration is now being addressed through a partnership with UK sequencing specialists Oxford Nanopore. The company produces portable genetic sequencing computers that proved effective during the recent Ebola outbreak, and the devices are now being distributed to CDP field laboratories.

Scientists are confident that genomic tools can be a game-changing asset against evolving threats such as CMD and CBSD.
“Development and deployment of resistant varieties is the most feasible approach to control these diseases,” says Fazil Dusunceli, agriculture officer at the Food and Agriculture Organization (FAO). “Sequencing is an important tool in this respect.”
“Sequencing speeds up the whole process,” says Dr. James Legg, a plant virologist at the International Institute of Tropical Agriculture (IITA) who has studied cassava disease for over 20 years. “You can identify molecular markers linked to resistance in the field and use them to pre-select plants.”
But Legg adds that innovation is not a magic bullet. He emphasizes the value of coordination, communication and collaboration between governments and institutions in response to the CBSD outbreak, which he believes is beginning to turn the tide.
The virologist has been working in five African countries to cultivate resistant varieties of cassava and he claims that several of these are now showing strong resistance in multiple disease-affected sites.
“I would say we are making excellent progress getting it under control,” says Legg. “There is now quite a high level of awareness which is critical as CBSD does not show strong symptoms and can be easily transported.”
The nightmare scenario of the disease reaching Nigeria — the world’s leading producer of cassava — may now be averted.
Some minds are already turning to the next crisis.

Ndunguru hopes the CBSD outbreak will have a positive legacy: that the resources and expertise gleaned from fighting it will help to build capacity and resilience in the region.
“Through this project we have established labs in all of the project countries that are equipped for disease diagnostics,” he says. “We have trained people in all of these countries to collect samples and analyze material…not just cassava but other crops too.”
The CDP is training dozens of masters and PhD students that would otherwise have traveled abroad for their education, says Ndunguru, and it is securing grants and resources to support them. He believes the initiative will help East African states to keep their brightest talents.
The experience of this devastating blight could prove priceless in curtailing the next.

Your Future is Not Outside Africa, Macron Tells Youth During Visit to Afrika Shrine

Nigeria’s NIPOST To Expand Mail Services By 70% With What3words