An analysis of seat capacity for travel to the top ten international airports in Africa, produced by ForwardKeys, reveals that Lagos is seeing substantial declines in both domestic and international capacity, mainly because Arik Air is cutting 53% of its seats for the rest of 2017. During the coming five months, August – December 2017, there will be 16% fewer airline seats on domestic routes and 9% fewer and on international routes to and from Lagos.

Commenting on this data, Jon Howell, Managing Director of AviaDev, Africa’s leading airline route development conference, said: “One of the major reasons for falling arrivals by air to Nigeria, is the fact that many airlines could not repatriate funds after the currency crisis in 2016. As a result, Iberia and United Airlines have ceased operations to Nigeria, whilst Emirates and the other foreign carriers have scaled back services. The Nigerian airlines have suffered too and so this void has been filled by the ever-opportunistic Ethiopian Airlines, who began serving their fifth Nigerian destination, Kaduna on 1st August 2017 and are now the largest carrier in the Nigerian market.

Most of the other airports in Africa’s top ten are seeing a healthy growth in capacity, which is more international than it is domestic. However, the most notable exception to this trend is Nairobi, which is seeing a 22% boost in domestic capacity. 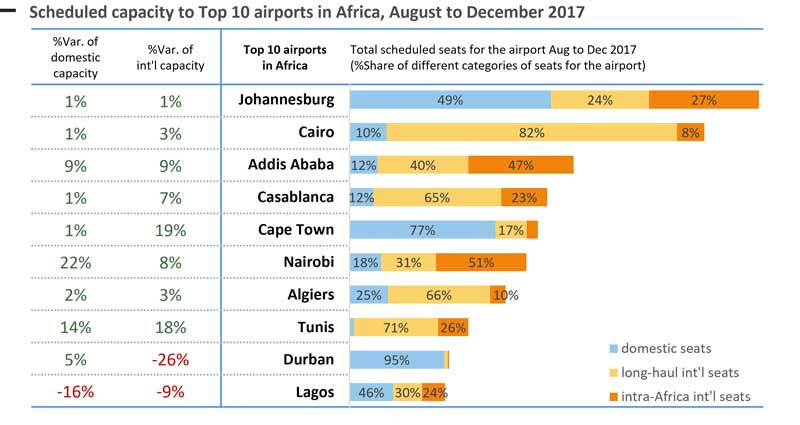 These findings are part of a wider report on travel to Africa, produced by ForwardKeys, which predicts future travel patterns by analysing 17 million booking transactions a day. It shows double digit growth in flight arrivals for the first half of this year and little indication that the pace of growth will slow down soon. The wider report will make encouraging reading for airlines, governments and hoteliers planning to discuss possible new aviation routes at AviaDev in Kigali in October. (AviaDev is organised by Bench Global Business Events.)

The report reveals that in the first seven months of the year, 1st Jan – 31st July 2017, total international flight arrivals grew by 14.0% over the same period in 2016. Most significantly, growth was stronger for travel to and from the continent than within the continent. Arrivals from Europe, which make up 46% of the market, were up 13.2%. From the Americas, arrivals were up 17.6%; from the Middle East, they were up 14.0% and from Asia Pacific, they were up 18.4%.  By comparison, intra-African air travel, which makes up 26% of the market, was up 12.6%. 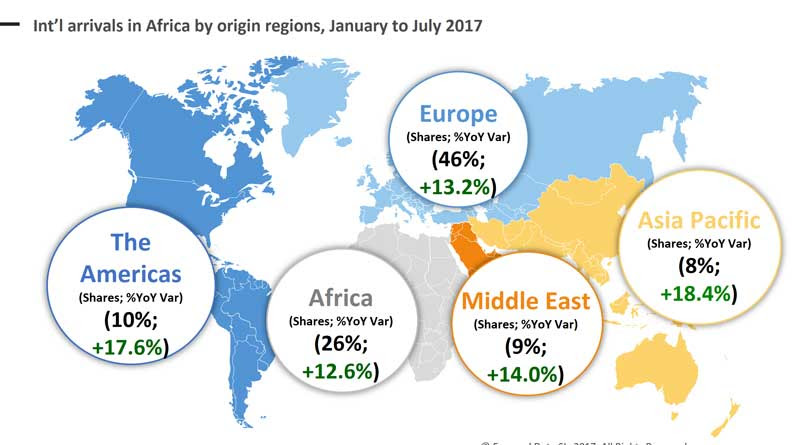 Looking at Africa’s top ten destination countries, there have been stand-out performances from Tunisia and Egypt, which are recovering from notorious terrorist attacks two years ago, up 33.5% and 24.8% respectively.  In addition, Morocco and Tunisia received a huge boost in arrivals from China, up 450% and 250% respectively, after they relaxed visa restrictions.  The one disappointment is Nigeria, which has seen a 0.8% drop, in the wake of recession in 2016, caused by a collapse in the oil price to a 13-year low. 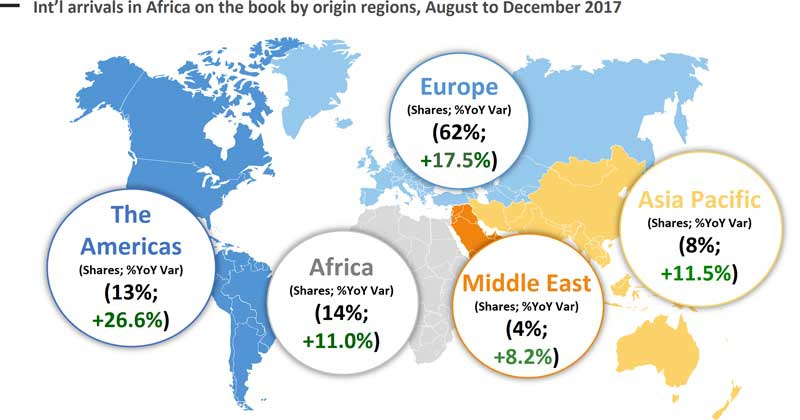 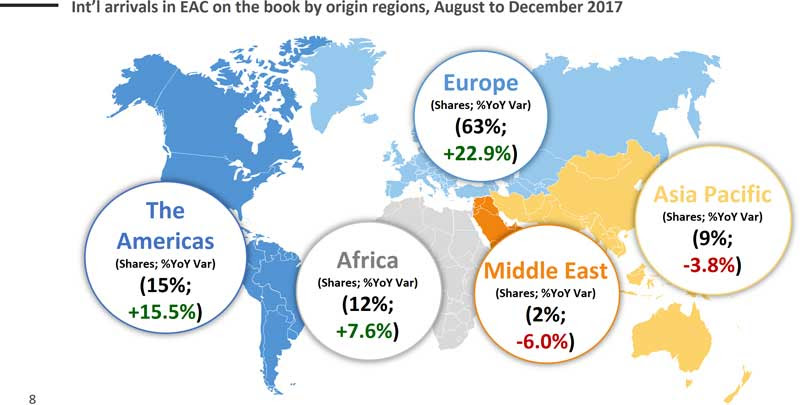 On an individual airport level, the most significant capacity increase in East Africa is at Kigali, with new routes to Brussels, London and Mumbai. Other notable new capacity includes Kilimanjaro to Dubai and Nairobi to Muscat and to Yemen.

Jon Howell, Aviation and Tourism Development Manager, Bench Events, who is responsible for AviaDev, concluded: “As an international executive who has travelled around Africa for many years, I am longing for the day when it is easier to fly directly between African cities, as is possible on other continents. I am sure I’m not alone in that desire and I’m equally sure, it will happen eventually. That’s why I’m determined that the discussions that will take place at AviaDev will help bring that vision closer.”