Ras Kimono, a giant of Nigerian music for over three decades, has passed away. He died yesterday morning. Born on May 9, 1958 to parents from Delta State, he recently celebrated his 60th birthday amidst fanfare.

Respected for being a dogged fighter and stickler to perfection, the late musician, performed with top reggae artistes such as, Shaggy, Shaba Ranks, Lee Perry, the late Lucky Dube, Culture, Inna Circle, Steve Wonder, Eve and K.C. and JoJo and a host of others.

He developed his own style of root reggae music that skillfully blended his African roots with classical Jamaican rhythm. This unique genre took him out of the country, where he played in major concerts in the United States, England, Italy, Kenya, Ghana and Papua New Guinea where his Benson and Hedges stadium concerts attracted a record average of 45,000 people per concert.

The last time he visited The Guardian office; he brimmed in confidence, promising to change the trend of music in the country.

He was dressed in a white top, with green, black, yellow and white stripes. He had a blue jean trouser, with brown trainers. His beret was green, yellow and red. He had eyeglasses on. Looking every inch younger, except for the frame that had grown heavier.

“Our music is growing. My only disappointment is that nobody is playing live music anymore. Everybody is miming and that’s not good for professional instrumentalists in the music industry,” he said.

He continued, tThe problem with youths here is that they are always looking for easy way out to make quick money. Sometimes, you will see young guys come up to say to you, ‘uncle I’m into music’. He gives you what he has done, and you will be surprised that the music has no quality, and that it is not done out of passion, but just for the money. They are always seeking easy money and fame. Since there is easy access to laptop and keyboard, you can programme what you want to. To make it worse, a lot of TV stations play these songs. You are now forced to ask what is National Broadcasting Commission doing and why there are no Not To Be Broadcast (NTBB) tag on them. Some of the lyrics are vulgar and are played on air and NBC is not doing anything about it. In the US, there are club versions and radio version. They just do one version and this is what is played on air. Easy lyrics. Some of the youths, who play this music don’t have conscience. Give them four to five years and they will fade out completely.” 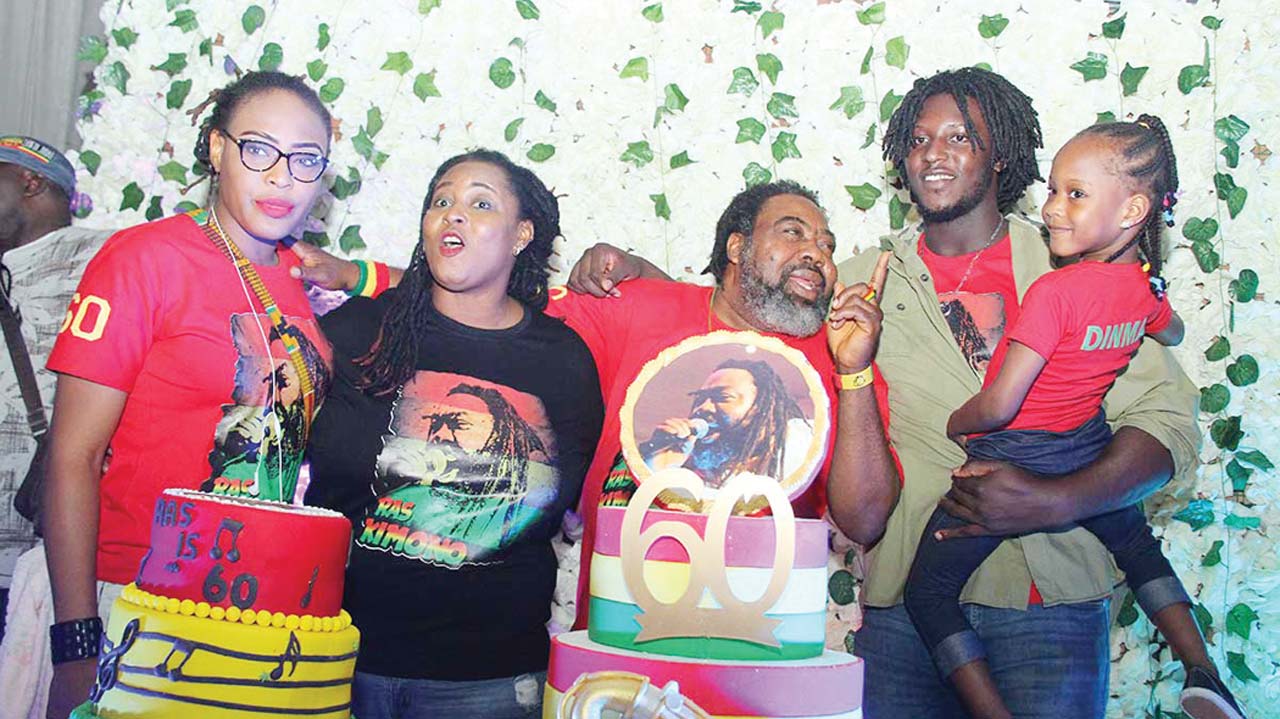 The late Kimono with family members on his 60th birthday

He breathed life to the discussion so much that you’d think he had death in his pouch. But all was a dream. As his name Onwubuya ‘Death is sorrowful’ suggested, death has really brought sorrow to an industry that has suffered so much death in the last few months.

Reacting to the news of Ras Kimono’s sudden death, the MD/CEO, Anambra Broadcasting Service, Uche Nworah, said the late reggae artiste died a legend, on and off the stage.

“We will remember him for his music, which inspired us all and also for his social activism, drawing attention to the many social issues that face our country. He was a true great, and inspired a whole generation with his longevity in the entertainment industry; it’s not a feat many achieve easily. Maybe because he understood the game, the show and business sides, as he always managed to remain relevant and contemporary, re-inventing himself when required.”

While describing his death as a huge loss to the entertainment industry, Nworah said, “We will surely miss him, but of course, his music lives on in our hearts. The joy and happiness he gave to the world through his music and personality remain enduring testimonies and legacy to his name.”

When The Guardian reached out to the President of Performing Musicians Employers Association of Nigeria (PMAN), Pretty Okafor, he could barely speak, as he was yet to recover from the shock

“I’m the person that called Eddie Lawani to find out before he drove to the hospital. I’m on my way to the hospital to meet with Eddie, but my heart cannot carry it. I just parked to reply your message. I’m so shocked to even write a tribute. This is one musician that never had issues with anybody; he was never part of any problem in the industry. Honestly, I don’t know what to write; I can’t even move from here,” Okafor said.

For Nollywood filmmaker, Emma Isikaku, the news was a big surprise.

“This is shocking! He’d been playing some shows with his bosom friend and colleague, Orits Wiliki, recently.”

In Isikaku’s words, Kimono remains one of Nigeria’s reggae legends. “He made his mark. Though dead, his voice lives on. It’s indeed a sad loss; may his soul rest in peace.”

In his brief tribute to the late musician, Lagos State Commissioner for Tourism, Arts and Culture, Steve Ayorinde, described him as “a consummate artiste that showed remarkable fidelity to his brand of music till the end. He will be missed.”

The reggae artiste, Kandy See, said, “I’m short of words. Kimono was a father to me. He was a nice man with a heart of gold. He wouldn’t stay a week without calling to know how I was doing. He was a real rastaman, who believed in the movement of rastafarians to the core; he was a reggae ambassador. The last concert he performed, I put together in Delta State. I will not only miss Kimono, I’m yet to believe I’m not dreaming.”

Reacting in Lagos to the death of one of Nigeria’s most loved musicians of the last three decades, COSON Chairman, Chief Tony Okoroji said, “Kimono was not just a great musician but a truly fantastic person. He had no angst against anyone and stood for truth and justice at all times. I have not just lost a colleague but a valued friend. This is absolutely devastating.

“I was by his hospital bed at Lagoon Hospital, Ikoyi Saturday night before he passed on, on Sunday. Despite his ailment he was in good cheer and we even shared jokes. I spoke to the doctors who expressed the view that he may have passed through the worst. I was at the domestic terminal of the Murtala Muhammed Airport, Ikeja on Sunday when I got the devastating phone call that got me screaming like a mad man. I was already checked in for a flight to Owerri. That was the end of the trip and the Airline had to go to the aircraft to retrieve my already loaded baggage.”

Shortly after receiving the news of the passing on of the great Ras Kimono, COSON Chairman Chief Tony Okoroji, top Board members, Sir Shina Peters and Maureen Ejezie, the General Manager, Mr. Chinedu Chukwuji, Head of Finance, Ms. Bernice Eriemeghe and key Consultant, Prince. Biodun Eguakhide who had visited Kimono the night before with Chief Okoroji, were at Lagoon Hospital, Ikoyi to condole with the family and ensure that appropriate arrangements are made afterwards.

Foremost music promoter and CEO of Cabal Entertainment, Obi Asika, said, “Ras Kimono was an original voice and a true legend of Nigerian music. I was deeply saddened to hear of his passing; God bless him.”

In his tribute to late Ras Kimono titled, ‘A good Brother returns to Jah! Emeka Oparah, a director with Airtel Nigeria wrote: “The last time I partied with Ras Kimono was in 2015 at Ember Creek, then on Awolowo Road, Ikoyi, with Orits Wiliki, Victor Eshiet, Tee Mac, Majek Fashek and Edi Lawani. It was an unforgettable night of Roots Rock Reggae and Rub-a-Dub. Ras Kimono, in spite of his bulk, something I complained to him about, was absolutely massive! He sang, danced, skanked and blew the sax like only he could do in a rumba stylee!

“We’ve been meeting on and off events since then and Ras has always been Ras, full of Reggae; full of philosophy; full of inspiration; full of brotherly love. Now, what’s this news I’m getting from Lebanon that he’s gone ahead of Jah people to the Grand Lodge above to be with Jah? I know it’s not a joke for we do not joke with such stuff in Nigeria but why now?

“Why Ras? What a gwan? Why such a good brother? He dedicated his life to fighting against oppression and for the oppressed. A man with the heart of gold, he gave his time, his cash and his word when it is most needed. Oh what a shame! A man, who’s just turned 60! He was yet to accept my apologies for not attending the birthday gig, but that I know was just a joke for a good Rastafarian bears no malice as Jah guides.”

Oparah continued: “Being a man of peace, you are no doubt resting in peace and getting ready for your first concert where all there is to life and living is peace, happiness, joy, music, celebration and praise worship. I thank God for the life you lived. Knowing you and calling you my brother and friend is nothing but a privilege. Rest in peace, bro!”

Over the years, Kimono was consistent with his brand of reggae music. Under Pressure, his debut album, released by Polygram International, in 1988, won the Gold Disc Award. The follow-up, What’s Gwan clearly surpassed the first. In fact, it won double Platinum. That album swept all major music awards in Nigeria including, Reggae Artist of the Year, Song of the Year, Album of the Year and Artiste of the Year Award.

His next album, Run Fi Cover, came out in 1992 and it was master hit. In 1994, he released another hit album, Oracle of Jah and nine years later, he came out with Still I Arise.

You Lack Understanding About the Powers of a President, Alison-Madueke Tells EFCC

UAE to impose value-added tax in 2018